"Alongside Blade Runner and Gibson’s Neuromancer, the Terminator films provided some of the fictional resources from which Nick Land constructed his extraordinary fiction-theory texts of the 90s. Lyotard’s Libidinal Economy + Deleuze and Guattari’s Capitalism and Schizophrenia remixed to remove all traces of anti-capitalism and spliced with the inorganic velocities and psychedelic cyber-topologies of Jungle. Accelerationism as inorganic anti-inhumanism: unsheathed Capital as implacable, rapacious death drive; Capital with its mask of humanity torn off, machines not as reified instrumental reason, but as a non-instrumental non-reason, the exorbitant anti-teleology of Capital’s purposiveness without final purpose de-terraforming the planet into a techno-Bochsian scorched earth unfit for human habitation. Capital as Real = Death, with the Terminator machine death’s head as the technological upgrade of Holbein’s anamorphic skull - artificial intelligence as artificial death - not now reduced to a cuttlefish smear blotting the Symbolic, but looming to the fore in a landscape in which not only human beings but the Symbolic itself is close to total extinction, as asignifying data transfer obsolesces . The imaginary-Real of Capital as the automatic autocracy of dead labour, dead production performed by that which never lived, its products the agents of death, for which there is no possible consumer."
Posted by Ross Brighton at 2:30 PM No comments: Links to this post

Is up. Find it here. There's a poem of mine in it.
I haven't read it yet, but look forward to doing so - more on that soon.
Posted by Ross Brighton at 3:58 AM 4 comments: Links to this post

A dude is suing Blizzard Entertainment, makers of World of Warcraft, for making him "alienated". He's subpoenaed Martin L Gore, of Depeche Mode, as an expert on alienation and depression. I feel kind of insulted that someone like this shares a love for the band (or so I assume). Intentional Falicy, anyone? He also obviously doesn't know that love songs are not always unrequited, and hasn't listened to much previous to Violator. Winona Ryder is also being called up, because she likes A Catcher in the Rye, which makes me wonder if this chap has heard of literary critics (wouldn't that be more appropriate?), or why, if calling Gore, he's not calling JD Salinger?

It's kind of beautiful, in its messiness and absurdity.

(Courtesy of Blake Butler at HTMLGIANT - coverage here and here)
Posted by Ross Brighton at 5:36 PM No comments: Links to this post

There's a reading on Pennsound - the only one.

Thanks to Charles Bernstein.
Posted by Ross Brighton at 9:54 AM 2 comments: Links to this post

a Collaboration with Jeff Crouch

So Jeff Crouch emailed me a week or so ago asking if I wanted to do a collaboration (more of his work: in Moria, collab. wiht Diana Magallon; Poems in Abjective, pics on Flickr through Jim Leftwich's TEXTIMAGEPOEM).

Here's a sample of the results (from my poem "Birds"). 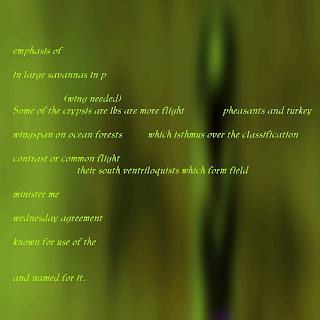 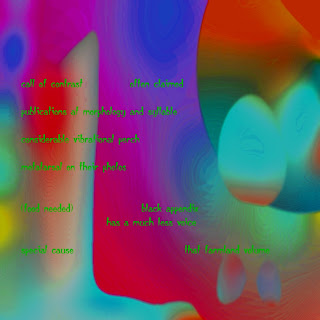 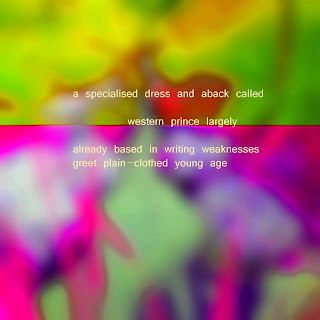 Posted by Ross Brighton at 11:20 AM 3 comments: Links to this post

Jerome Rothenberg has posted the second part of Pierre Joris' manifesto.
Posted by Ross Brighton at 2:06 PM No comments: Links to this post

A reply to a fragment, probably taken out of context, from an interview with David Howard

Tim Jones has interviewed David Howard here. In the course of the interview David states, in the context of a scathing indictment of globalisation, that "Following New Zealand's political reorientation, our poetry has turned from British to American (rather than indigenous) models. This is change but not the liberation that many claim."*

What? Aside from the criticisms of Bill Manhire (which seem to have more to do with the IIML, and by extension VUP and Sport - for which the criticisms should probably be leveled at Fergus Barrowman - than his poetics) there is little or no actual discussion of what this means. Sure, anyone can see the Ashbery influence in Manhire's work (though to be honest I haven't really read much post 1990 - his work seemed to go downhill around then), but what does that mean?Strangely David praises Michele Leggot's DIA, saying that it "deservedly won the New Zealand Book Award for Poetry" in 1994. Michele took her Doctorate in Canada, on the work of American poet Louis Zukofsky. Her first work was published in Canada, and she is heavily influenced by US (and Canadian) language writing, and has been instrumental in bringing US poets to NZ to expose students to a larger range of practices (two talks given at the University of Auckland by Lyn Hejinian are available here and here).

As I've already stated the criticism of US influence in NZ is nothing new (and Allen Curnow's beloved Eliot and Auden were Americans, much as Eliot would have liked it to be otherwise), and besides, what, really is the alternative? Politics of regional genesis seem trite and petty. Just compare Auden to, say, Bruce Andrews, and you will see there are a multitude of different "America"'s, and such a matrix of practices extends beyond the US borders into Canada, the UK ... and has it's genesis in Fin de Siècle Europe.

As such, and in light of the fact that any pretence at autonomy (or regional "authenticity" - though Patrick Evans may disagree) is willful blindness - simply the importation of the idea of poetry (and with it the Greek Poesias) renders the attempt futile), what is the alternative to such? The fact that we now have global, instantaneous communication means that any attempt top cordon off the cultural precinct of our corner of the word (while subsequently trumpeting the "world class" qualities of our arts) is regressive in the extreme. I for one would rather join the world than engage in the CNZ brand of platitudinous marketing of "NZ identity".

*Obviously I'm writing this as a Pakeha writer. I would feel very uncomfortable appropriating "indigenous models" for my work, without the kind of full cultural engagement that I do not feel is possible; and even so I feel that such could easily turn into a kind of cultural tourism - cultural practices as commodities for consumption. The same kind of surface use of Maori idiom that one sees used by people who don't speak fluent Maori - meaning that the use of the word does not have the kind of full semantic underpinning and nuanced understanding of connotation as well as denotation that would be utilised if the word was English.
Posted by Ross Brighton at 2:57 PM 18 comments: Links to this post

On Ariana Reines' THE COW

In honour of HTMLGIANT celebrating "Ariana Reines Week" I thought I'd post the following. It didn't make the final cut of an essay ("Recent Developments in American Poetry" - and I had to loose 2000 words) to be published in February's Poetry NZ, replying to Lee Posna decrying the amount of so-called bad poetry being published in the States.

[…] Ariana Reines enacts a poetics of disaster, overflow and obscenity. Her first book, THE COW (Fence, 2006), is “is a voluptuary, a vat of mushy ideals and disgusting feelings” (“Sucking: a Statement of Poetics”). She states that she has often “resented the cleanliness and elegance of tight and perfect writing”, and “felt that writing should be dirtier and more excessive”. Dirt and excess abound in these poems, such as in “Nico Said Excrement Filters Through the Brain. It’s a Kit”:

There’s no malediction. No thought can poison me. (15)

This work is anti-homogenisation, anti-normalization; an assault on ideas of aesthetic, literature, morality, gender, society and pretty much everything else. As James Pate states in his essay “Wittgenstein, Deleuze, and the Political Grotesque”, Reines is functioning “in a similar vein as Burroughs and Godard, who were committed to stealing from any genre that they might find useful in order to create effects that a more normalized aesthetic … could never achieve”. Reines reinforces this in the acknowledgements page at the back of the book: “This book contains text from many sources”, then lists these as variously coming from poetry (John Ashbery, Paul Celan); Philosophy (Deleuze and Guattari); and religious texts (The Bible, The Koran, Alistair Crowley’s Magick Without Tears); alongside Carcass Disposal: a Comprehensive Review by Auverman, Kalabasi and Ahmed; The Merck Veterinary Manual and the website of bioSAFE engineering – manufacturers of the WR2 Tissue DigestorTM, a system for the “disposal of anatomic and pathologic waste” such as “animal tissue and carcasses from biomedical and pharmaceutical research facilities” (bioSAFE website).

The centre of subjectivity in these poems rapidly shifts from site to site, though a stream of carnage, holes, tearing and animality, in which language fails and falls back on tropes of self-doubt, self censorship and interruption: “I am part of something because my life is so stupid” (25), the eruption of “CROTCH” (26), refocusing attention on the materiality of the process of composition. This foregrounding of tics often associated with ‘juvenile’, ‘bad’ or overly emotional (hysterical) writing is reflected in the choice of an epigram from Stein: “Sucking is dangerous. The Danger of Sucking.” This is echoed in the title of her poetics statement, demonstrating her commitment to a poetics of the distasteful, bad, dirty and excessive, dismantling masculine tropes of wholeness, logic, craft and art. In short, a poetics that “sucks”. The poetic enacted in this book problematizes subjectivity through its scattering and stuttering, its privileging of the emotive, the “mushy”, the libidinal and the disgusting.

Posted by Ross Brighton at 2:20 PM No comments: Links to this post

Johannes just posted this piece By Joyelle - apparently the whole piece is in Fence.

Exerpt, in keeping with the discussion here (in the comment stream), follows:

"3)Bataille says “the term poetry [...] can be considered synonymous with expenditure; it in fact signifies, in the most precise way, creation by means of loss. Its meaning is therefore closer to that of sacrifice.’ By sacrifice he means a loss unto extinction; Sacrifice produces sacred objects. Furthermore, “in particular, the success of Christianity must be explained by [...] the Son of God’s ignominious crucifixion, which carries human dread to a representation of loss and limitless degradation.”

"5)Or, put another way, there’s no success like failure."
Posted by Ross Brighton at 2:05 PM 4 comments: Links to this post

Special section on Canadian writers, edited by François Luong.
At a glance I'm very impressed with the work by glenN robsoN.
Posted by Ross Brighton at 6:59 PM 5 comments: Links to this post

Exegesis of Snoop Dogg
Posted by Ross Brighton at 9:43 AM No comments: Links to this post

I've just added a lot to my already massive blogroll (down the side there) - but there is so much amazing writing/writing about writing/post-writing (I'm not sure what else to call it - vispo and the like) out there. Check out, especially, The New Post-literate, mIEKAL aND's work here, Reed Altemus and Ross Priddle. (New Links came from here - there are more).

Two other online poets who I have been following for some time, and whose work is amazing, are John M Bennett and Lanny Quarles (Lanny has another blog here).

I also just ordered a copy of the Late Great Leigh Davis' Willy's Gazette (The Jack Books reprint) off Abebooks - The first copy I've ever seen for sale (though maybe there are copies floating around up north). I'm eagerly awaiting it's arrival.

Posted by Ross Brighton at 8:17 PM 5 comments: Links to this post

Ross Brighton
Poet and Critic based in Auckland, New Zealand.

beck: nothing to be done. Publication Studio Mälmo, 2013. Purchase here.

I gratefully acknowledge the support of the Creative Communities scheme in aiding the publication of my chapbook.